Earl sailed up the Belize coast

With the mother of all hangovers

No water and a note

In an ocean-side tourist bar

Trying to get a jump on happiness

In the hour before happy hour

I had just landed on Caye Caulker, which is little more than a sand spit off the coast of Belize, when it started to rain heavily. There was nothing else to do but go to an ocean-side bar, in the hour before happy hour. It was as crowded as a bar gets on Caye Caulker and there was this guy bragging in a loud voice about how he had just sailed up from Placencia in his new boat with “the mother of all hangovers” and no water on board. The guy was a bit of a jerk, so I decided to write him into a poem (which turned into this song lyric) and give him a hard time. By the way I tried working “Placencia” into the lyric but the word just hissed and flopped around like a drunk snake, so I gave up on it! Take a listen, and then John Mitchell will explain how he managed to sound like a rock band all by himself!

I could hear “The Note” played by a real southern rock band. That’s the attitude I took to the musical arrangement. Earl had a bad case of the regrets mixed with a helping of anger, a bad hangover and topped with a soucent of despair, all in all a pretty heavy feeling, so it needed rough and heavy music. The opening distorted guitar lick is a nod to “Susie Q” by CCR played through an overdriven Fender Deluxe amp. I tried to make the track sound like a 5 or 6 piece band playing live in a smokey, roadside bar. I added the rock and roll piano on the choruses, as if Leon Russell was playing and the greasy Hammond organ as if Greg Allman was sitting in, especially the solo played through an overdriven Leslie speaker with a tear in the cone. I think Earl would appreciate how the band interpreted how he was feeling after getting “The Note”.

Click here to preview/ buy the whole album or individual tracks! Also available on iTunes (search for “The Mitchell Feeney Project”, no hyphen) 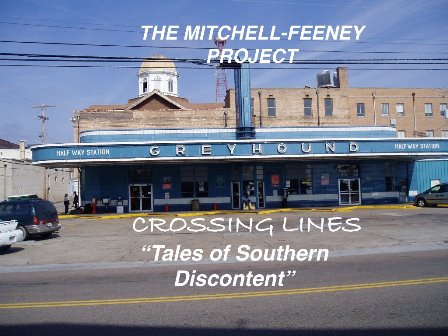