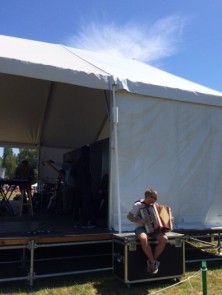 Great weekend at the Vancouver Folk Festival, highlights for me were Rhiannon Giddens, Bahamas and The Revivalists plus three young British folk singers (more about that later).

I was particularly interested this time around in hearing the response of the folk music world to the current political climate in the USA, Britain, to climate change, to the refugee crisis. This was all touched upon in a workshop I attended on the Friday afternoon which was led by Billy Bragg. The theme was “Working Class Heroes”; Rhiannon Giddens and Grace Petrie were part of the group of five singers on stage. I saw both of them give better performances later in the festival, here they seem constrained by the downbeat atmosphere. The song introductions, although heartfelt and eloquent, went on way too long;  Pete Seeger’s name was dropped more times than an egg at a drunken egg and spoon race. Later in the evening, Billy Bragg sang “There’s Power in the Union” and a song about climate change which was essentially a rewrite of “The Times they are a Changin’”. On another night, Shawn Colvin sang a beautiful version of Paul Simon’s “American Tune”. It all felt a bit nostalgic, the established singers seemed to be creatively chewing on a bone when it came to addressing today’s issues, to be looking back to former struggles for inspiration.

However, in the afternoon of day 2, I attended a workshop called “Keep Calm and Carry On” (which was a poster produced by the British government in 1939), and I found what I was looking for – folk music as a living organism. The performers – Jake Morley, Will Varley and Grace Petrie, all English – were anything but calm, “stay angry and carry on” would have been a better description. Of course it’s not enough to be angry, an artist has to make his/her anger interesting and that they did. They were all in their own way, original, talented song writers – witty, profane, poetic, self-deprecating (they are English after all). Grace Petrie is more punk in her approach, has a gift for word play and knows how to write a chorus; Will Varley manages to be Dylanesque, but be his own man at the same time – a poet with a bullhorn voice; Jake Morley writes more complex songs, has a gift for melody and is a percussive, propulsive guitar player who reminds me a little bit of Cat Stevens with his off kilter rhythm. But most of all, they were very funny and had none of that smug, preaching to the choir earnestness that sometimes plagues folk music. Check out Grace Petrie below:

And here’s a reprise of a poem, I post every year at this time.

Slim at the Vancouver Folk Festival

One hour into the folk festival

and a mellow, minor key, melancholy

is seeping into Slim’s bones,

and he wishes that someone

would duck walk across the stage

at the chill, Tilley clad audience

who, unlike Slim, have a default mode