I ask Slim for his response to a recent report that Nigel Farage thinks it would be a good idea to re-do the Brexit referendum. We arrange to meet for a few pints in ‘The Post-Coital Beetle” to discuss his response and catch up. Slim is late, so I get a booth, and order a pitcher of Blue Buck. On the television screen suspended from the ceiling, two ex-soccer players – Matt Holland and Phil Neville – are discussing possession stats for the English premier league; apparently, the team that keeps possession of the ball usually wins. Not rocket science, but then Matt and Phil are not rocket scientists. They both look trim and fit in their English sportscaster casual wear. Phil is wearing a beige V-necked sweater, a white button down shirt, tight black pants and fashion sneakers. Matt is wearing a black crew neck, tight black pants and, yes, fashion sneakers. They look like their mothers dressed them.

I have never met Slim’s mother, but I doubt if she would have dressed him in the outfit he is wearing as he bursts through the pub door like an overweight, balding Kramer – faded baggy jeans, a MEC Gore-Tex anorak whose wicking days are long over and a white T shirt, one size too small, with the message “Fragile” on the front. He slaps a sheet of white paper on the table and says:
“Here you go!”

On the paper lies the following poem:

Nigel Farage
will be remembered forever
as the man who made
the word, ‘wanker’,
seem inadequate.

Very good, I say, “disparage”, “Farage”. What do you want to call the post?

Ha! Or how about : ‘Guess who’s coming to Brexit’!

Slim looks like he has just swallowed a cup of Drano.

I think you’re missing the fucking point. It has to be a movie or book with ‘Breakfast’ in the title, like, say, ‘Brexit of Champions’ or ‘The Brexit Club’.

Who took Sidney Poitier to dinner?

How did you know, no one ever gets that right.

I know because every time you have a few drinks, you ask the same fucking question.

Why not? Life’s short.

It’ll be even fucking shorter if we keep eating Poutine.

We both lean back and laugh. On the screen above our heads, Manchester United score a goal and the colour commentator says: 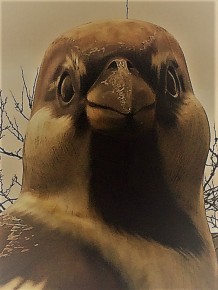 A Brexit poem from Slim’s locker: