This time last year, at every social event I went to, the subject of Donald Trump could not be avoided. This year? Nothing. The Trump presidency has become a bit like one of those television series that people get tired of watching – no discernible plot, no character development, poorly written dialogue and we still have to suffer through seasons 2, 3 and 4.

These are the Trump posts  I had most fun writing in 2017, they rely a bit more (I think) on language rather than straight polemic.

it
does
not
augur
well.

A farrago of fiascos,
banishments and bans;
weekends at Mar-a-Lago
the world in his hands.

Agent Orange has a Dark Moment
Do you know who I miss? Jeb Bush. I miss Jeb Bush. He was my first. When I hit him with that low energy jibe and he fell apart and all the Bush family could not put Humpty together again, I knew I was on to something. Then Little Marco and Lyin’ Ted, I miss them too. But most of all, I miss Hillary, Crooked Hillary. Man, she was tough, had me on the ropes. It took Comey and Vlad, that pointy headed villain, to get me back on my feet. I was nearly out for the count, which might not have been a bad thing. Who needs this shit! I should give Vlad a call, I’m a bit worried -there’s no such thing as a free hack.
Reince Priebus – what kind of fucking name is that? It sounds like bad news from the doctor. “I’m sorry, Donald, you have a Reince Priebus on your rectum and it doesn’t look good”. Ha, I just made myself laugh. And Bannon, I’ve seen sofas on the side of the road in better shape than that rumpled fucker. Spice Box? Hardest job in the world – explaining the unexplainable. That Melissa Mc.Carthy just slays me. How come all the cool people are on the other side? Who have I got? Ryan and Pence? Bland and Blander? Where did Pence come from anyway with his brush cut and his antediluvian politics? The best surgeons in the world couldn’t remove the poker from that guy’s ass. Antediluvian, you didn’t expect that did you?
Talking of cool, I should give Barack a call, ask him down to Florida for a game of golf; check his birth certificate again (Joking! How I miss those days). Man, I hate this fucking White House furniture, is it Friday yet?

America has given birth
to a giant orange child
a zaftig infant Gulliver
striding the ravaged earth
of his own imagination
trampling whole villages
swallowing villagers whole. 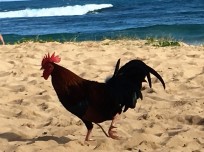 Rooster on the Beach

cocksure, cock of the walk,

ruler of the roost

dawn, or no dawn.