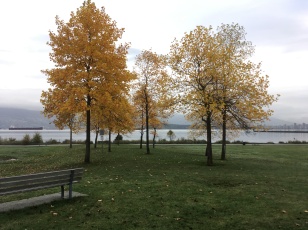 The leaves on the trees

I have played around with this poem a few times in previous posts, some poems are never finished,  I guess, they are just resting. Perhaps, in the case of this poem, it’s because the subject was pretty much nailed by John Keats in 1819 at the age of 24.

My friend, the poet Slim Volume, once gave me this advice:

Avoid autumn and death,
They’ve been done before;
There’s little more to say
On either score.

Also, waves like marathon runners
Collapsing on the shore,
The inexorable march of time,
Don’t go through that door.

Autumn in Vancouver means it’s time for the Vancouver Writer’s Festival. Last Saturday I went to see the Scottish novelist and journalist, Andrew O’Hagan, talk about his adventures as ghost writer for Julian Assange and his ultimate disenchantment with Assange,  whom he now regards as an unprincipled narcissist. He also read from some of his own novels. He talked for close to one and half hours and is an engaging, intelligent, witty speaker who in the course of his readings imitated a range of voices from Marilyn Monroe to a group of Scottish people in an old folk’s home on New Year’s Eve. But it was a question he took at the end that more than anything else stuck with me long after the talk ended.

He was asked by an audience member whether he thought that the internet and the platform it provides for self publishing through blogs, websites etc was a good thing in general for English literature in that more and more people are now writing fiction, poetry etc. He replied that initially he thought that it was a good thing but now he wishes it would stop, primarily because of the poor quality of what is being produced. Writers are not taking the time to edit and re-edit their work, they are in rush to get something out when maybe they should be waiting. Writing, like all art, requires hard work, diligence and talent.

The next day, the sun came out after a week of constant rain, so we headed out for a walk on the beach. As we left the house, this line popped into my head: ” we walked out today to celebrate the absence of rain”. I’ve been writing haiku’s recently as a kind of mind game, a poetic Sudoku, so by the end of the walk, I had this:

we walked out today

the absence of rain.

When I got home, I went straight to my laptop and posted the poem. An hour later, I had a look at the poem again and I trashed it immediately. It was flat, wooden and had that self-consciously poetic tone  that haiku’s sometimes have. In addition, I had destroyed the rhythm of the original line by trying to adhere to a syllable count. This might have been better:

we walked out today

the absence of rain.

It keeps the assonance of the ‘a’s’ running through each line, plus the half rhyme between ‘today’, ‘celebrate’, and ‘rain’ and it keeps the ‘b’s’ in ‘celebrate’ and ‘absence’ close together. In addition, it’s an internet friendly length, three lines long, just the right length for clicking on and moving on.

On the other hand, I could just tuck the line away until I find a better context for it.

Is it just me, or is Andrew O’Hagan looking over my shoulder

5 thoughts on “Another Go at Autumn/ Andrew O’Hagan at the Vancouver Writer’s Festival.”